As Bitcoin (BTC) continues hovering around the $20K area, the balance on exchanges is shrinking. 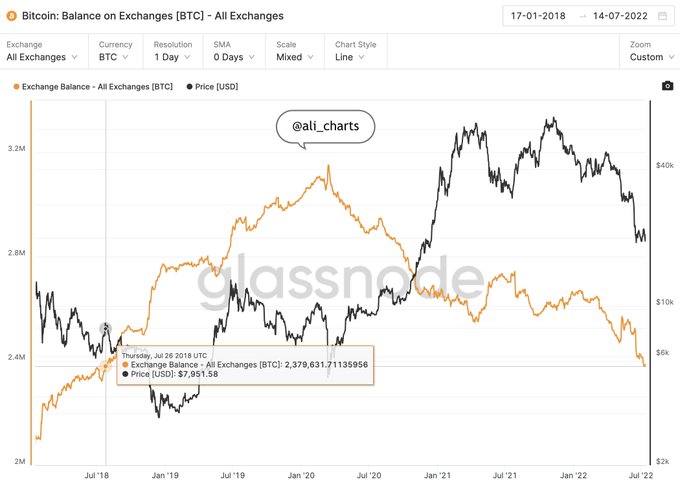 Bitcoin exiting crypto exchanges is bullish because it symbolizes a hodling culture, given that coins are often transferred to cold storage and digital wallets for future purposes other than speculation.

With BTC’s balance on exchanges dropping to a 4-year low, time will tell whether this will trigger the much-needed momentum to drive the leading cryptocurrency upwards based on its current consolidation around the psychological price of $20,000.

For the ranging market to be breached, Michael van de Poppe believes the $21,200 area should be broken. The CEO and founder of educational platform Eight stated:

“No break of $21.2K for Bitcoin means some more consolidation. On the other hand, the coming weeks are crucial for EUR/USD. It makes sense to have a slight reversal there, and I’m also expecting Bitcoin not to be done with the upside. Cracking $21.2K is a crucial one.”

Similar sentiments were shared by crypto trader Rekt Capital, who pointed out:

“It’s easy to become bullish on BTC on a green day & bearish on a red day. But BTC is still just between $19K-$22K. This will continue until either of these levels is broken.”

Bitcoin oscillated around the $20.6K zone during intraday trading, according to CoinMarketCap.

“Bitcoin’s mild +8% July rise has been enough for crypto traders to begin breaking out the lambo & moon mentions again. Whether sarcasm or not, this occurs when traders are becoming overly optimistic. Mentions hit their highest levels since Jan 18.” 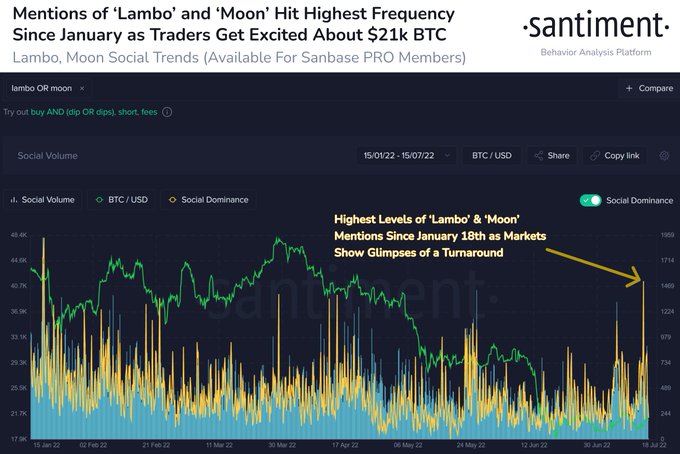 Furthermore, BTC was one of the trending topics among investors due to high social dominance levels, Blockchain.News reported.